FIT YOURSELF INTO THE CREATION OF YOUR SOUL

FIT YOURSELF INTO THE CREATION OF YOUR SOUL

There, in the bosom of Love, where the silent Trinity is Itself, lost and immersed into the virginal depth of its simplest being, one perceives the murmuring murmur of Trinitarian charity in the simplest unity of divine love.

Immersed and lost into that self-being of the Being, going into the deep, deep, depth…! of His eternal wisdom, I come upon that sublime instant, that instant of life, of fruitfulness, of plenitude, in which, not being an instant, nor a second, nor a moment, in that most simple act that is called “Eternity”, God is being Himself in Himself, for Himself and of Himself, the fruitful act of being in three Persons.

And in that self-same coeternal act, He who Is Himself, out of an infinite and loving delight, breaking forth into creating will, in a desire that is action, desires creation; in a desire that, in that very instant or act of being, brings about creation.

Creation, to our mind which is accustomed to time, unfolds little by little; but in the eternal present of Divine Wisdom, creation is an instantaneous will performed by the Creator in that self-same creating will.

Oh mystery of Eternity…! Incommunicable and unfathomable Mystery, for our human mind, as long as we remain within time; Eternity, being itself in God -like all mysteries- Simplicity and Simpleness itself….

Eternity, fruitful Eternity…! wherein, in that very instantaneous and eternal act in which God is Himself, He creates.

For God there is no before, no after. In His fruitful Gaze, burning in the blazing flames of the Holy Spirit, through the Word and in the Word, He makes all things.

And as the supreme creation, that leaves, without leaving them, the hands of the divine Artificer, the marvelous soul of the Word of Life Himself! in which all creation has been fashioned and recapitulated, in such a way, that each and every one of the animate and inanimate creatures are a finished reflection of the soul of the Word Incarnate, since this soul is the most perfect image of the Creator Himself.

After the soul of Jesus, Mary’s soul, a unique creation, made by the divine Omnipotence to be Mother; being Mother to such an extent, that She is the Mother of God Himself and, as the crown of Her divine Motherhood, the Mother of all souls.

God is so infinite, so perfect, so fruitful and so eternal, that all that comes from His hands, whether animate or inanimate, is as it were one single and unique creation, whether it be the supreme and greatest possible creation of Christ’s soul, or the simplest poppy of the silent valleys; since, for God being Himself the unique Perfection, when He creates, He does so in His Triune Unity, pouring Himself over each creature with all of His infinite being, in loving creation.

That is why every little creature and all of creation are expressing, speaking and crying out, according to their own kind and manner, God’s eternal and inaccessible being; even though between animate and inanimate creatures there is an immense difference; and an incomprehensibly greater difference with Christ’s soul.

O Love…! Immersed in the sacred mystery of the Eternal Wisdom, penetrating into the creation of each rational creature, I see how it is not that God has created, wholesale as it were, thousands of Angels, Archangels, Seraphim, Cherubim and men, but rather, that the Creator, being infinite and fruitful Capacity, as a loving Father, creates thousands of Angels; and at the very instant that He creates those Angels, as in Him there is no time, He makes each of them as though a new and unique creation, depositing in each one the image of His loving being that bursts forth into the One Trinity and reflecting Himself as Creator.

Coming down to man, we see the divine Artificer creating the soul of each of us as if it were the only one, and pouring Himself upon it in the super-abundance of His loving being.

In God’s light and in the truth of the Eternal Wisdom, we will see how each rational being, each soul, is a creation completely different from the rest; and God, on creating them, poured Himself out on each one as a unique creation; Himself being able to say as in the Song of Songs: “You are my only one, my dove, my chosen one amongst thousands,”  because on creating you, I, the Divine Potter, did not place you in a mould, as human potters do, so that many similar creatures would come out, no; I conceived you in my divine Gaze breaking forth into creation, taking my Word as a pattern, in Whom all truth and divine and human life is expressed; and I did this in the love of the Holy Spirit.

On creating you, whoever you may be, the three divine Persons, jointly, poured Themselves forth, taking delight in one single creating gaze, in order to create you “in Their image and likeness.”

That is why each soul has its own special physiognomy, its own particular beauty, and its unique name given to it by God on the day He created it, as befitted its physiognomy within creation.

Each soul has its own name, and in Heaven there will not be any created being like it, because it will bear that name which God, in His infinite loving wisdom, has fashioned only in it on creating it; a name that is altogether as if it were an expression of the Creator, which will reflect that nuance or physiognomy that the Divine Wisdom wanted to impart upon it in order to call it so eternally.

Each soul is a completely unique creation among the rest, that the Lord made for Himself for the delight and enjoyment of the three divine Persons, in such a way that Love is able to say in truth and justice: “I have come to my garden, my sister, my bride; I gather my myrrh with my spices, I eat my honeycomb with my virgin honey, I drink my wine with my milk.”

Therefore, let’s not wander about looking at others and striving to imitate this or that path, thinking that the path of others is better than ours, since this means actually to scorn the way our soul was created, since for God our soul is His only one amongst all others. It is convenient therefore that we adapt and adjust ourselves to God’s creating will for each one of us, Who fashioned us the way we are and not in any other way.

Even though we may not understand it because of our great imperfection, that which God in His infinite wisdom gave us, is what is best for us. Let us not go about deluding ourselves, and thinking that the paths through which the Lord leads other souls are better. Because when Infinite Love created you, He placed in you, according to the physiognomy He gave you, the path, the shape, the pattern that you had to follow, depositing in your soul the talents and capacities which suited your soul, as His love’s only creation, in order to fulfil that divine plan, and so that He could call you by your own name, by the only name through which He will recognize you, since with that name and in accordance with that very name He created you.

In Heaven each one of us will have our own name, the one given to us by God when He created us; and it will be more or less complete, fulfilled and glorifying for God Himself, to the extent of our fulfilment of the divine plan for our creation.

Let us not go around looking at others in order to please God more or less, wanting to imitate the ways of being of others. Let us go within ourselves, there, into the centre of our soul, where the Father, bursting into a Word of Fire, is spelling out to us through His Word how we will conform better to Him and to His creating will.

The Divine Word is teaching each one of us, as if each were the only creature, as if we were little children, how to fit into that divine mould, with which His loving will wishes to see us fully identified; a mould that was broken and warped by original sin, and which now, by striving to identify ourselves with the creating will of the Eternal Wisdom, we will proceed to reshape little by little until we so conform to it, that the Creator, the divine Artificer, will again be able to see in us that creation which, coming forth from His breast, He made for Himself for His accidental delight.

Holiness consists in our fittingin with the loving plan that the Eternal Wisdom has for each of us. Because, what would become of the poppy if it were always striving to be a rose, because it thought, through its own gaze, not through God’s, that the rose was more beautiful than itself…? Well, it would spend its whole life leaning towards the rose, without adjusting itself to that divine plan which, by having created it a poppy, made it so simple, so innocent, so naive, thus reflecting the simplicity of God. 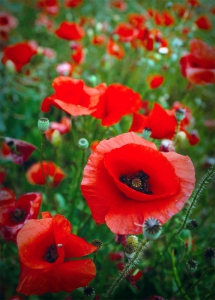 Both the rose and the poppy are expressions of the divine perfection, and while one flower expresses some attributes better, the other flower reflects another set. But when each one of them fits into its mould and reflects one attribute, it reflects the fullness of the divine Being, since each attribute contains all the other attributes or perfections, and, therefore, also the divine life in its Trinity of Persons.

Once the poppy becomes disengaged from the divine plan, it would become an unhappy poppy that, outside of its mould, would feel sadder, poorer and feebler than others.

Only God Himself knows the name of each soul, and only by that name will He recognize it. And those souls who, because they do not fit into the divine plan, are not in conformity with their name, will be the ones to whom the Creator will say at the time of the wedding: “Truly I say to you that I do not know you,”  because I do not see Myself reflected in you according to My creating will, which lovingly chose you and created you so that you might be in My bosom a jasmine of humility or a poppy of simplicity.

Take good care therefore, lest, “dazzled and attracted by the paths of your companions, you should get lost,” and be to me a white lily or a rose which I detest and do not recognize in you, while missing in my creation is the sweetsmelling jasmine and the hidden poppy that I sought for my enjoyment.

Soul created by God, do you think that to the Love of infinite fatherhood a rose is more than a poppy…? Do you not see that in each one of them, the Creator poured Himself out, making of each “His only one, His dove, His chosen one and His beloved amongst thousands…?

Only by fittingin with that divine plan will each soul fulfil its mission, and thus each one will be able to be called by its own name as befits its created being; since, when God poured Himself out over them, He moulded Himself into them with His whole being; and each and every one of them, by fulfilling the divine plan, is a created reflection of the Uncreated One.

Offprint of the published book by Mother Trinidad de la Santa Madre Iglesia: «THE CHURCH AND HER MYSTERY»

Help us if you can